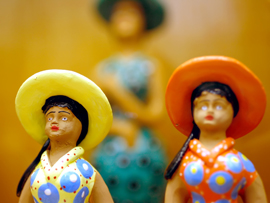 A pair of US lasses have come up with a range of bags which sport solar panels — the idea being that happy shoppers leave the bags by a window and use the resulting power to charge up their mobiles or iPods. You can read more about them here, if you’re of a mind to. Here’s a snippet:

“We were feeling really powerless in the decision-making process of our country going to war,” Palmer said. “We felt we were going to war mainly for oil. How could we give people power that is renewable power, individual power?”

Perhaps that might be over egging the political pudding, but Greenbang likes the idea. Only it got Greenbang thinking: surely hats rather than bags are the ideal personal solar panel carriers – always worn outdoors, and on the closest part of your body to the sun.

So Greenbang would like to issue a challenges to celebrity hat-wearers to get their millinery solar-panelled. The Pope, the Mario Brothers, U2’s the Edge, cowboys and pirates – over to you…