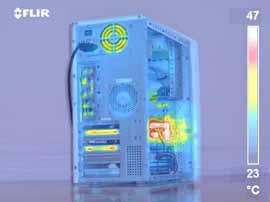 Wow – thermal images of just how much heat your computer pumps out.

Neoware sent these over – so thanks to them for that.  Here’s their take on the pictures, with a cheeky plug, if you will. 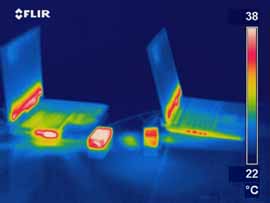 The thermal imaging photography reinforces the ‘green’ credentials of the m100 – the leading thin client laptop on the market – as it clearly demonstrates how it emits less heat than a traditional laptop. 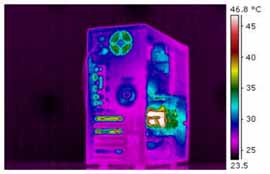 Further photography of a desktop PC found that the hard drive, CPU and chipset reached temperatures in excess of 47°C, with the power supply fan at temperatures over 30°C. As thin client devices do not contain these moving parts, the photography is proof that thin client computing is a greener alternative to PCs. Indeed, the desktop PC was photographed in a quiet state, so had it been functioning at full capacity, the chipsets and processor would have been even hotter.