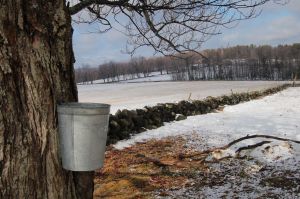 Greenbang just spotted this post highlighting some of the less-known impacts of climate change.

Some are surprising, such as the decline in a dairy cows’ productivity once temperatures rise above 25 degrees Celsius. This could cost California alone up to $900m a year, according to the researchers.

Maple sugar will also take a hit, due to reduced sap flow (pictured), while others, such as a drop in winter sports, have been obvious to anyone trying to ski in Europe over Christmas in the past few years.

Agriculture Cut: New York State’s agricultural yield may be reduced by as much as 40%, resulting in $1.2 billion in annual damages. Water shortages in California’s Central Valley could lead to $6 billion in annual losses during dry years. Agriculture surrounding San Antonio Texas Edwards Aquifer could reach losses of $3.6-6.5 billion by 2030 and $6.75-10.13 billion by 2090.