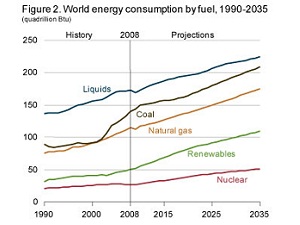 We have all the technology we need today to live more efficiently and sustainably … or so we’ve been told by everyone from Princeton University to Siemens. Unfortunately, another reality — Jevons Paradox — seems to be superseding that possibility, as this graph from the US Energy Information Administration’s (EIA) International Energy Outlook 2011 makes clear.

Jevons Paradox, named for the 19th-century English economist William Stanley Jevons, warns that increasing efficiency doesn’t decrease consumption. Instead, as Jevons discovered with technology advances that made coal mining quicker and easier, improved efficiency results in greater consumption. In other words, when it’s easier to consume more of something, we do.

There’s more at play, of course, in the graph here than improved efficiency alone … although the fossil-fuel industry regularly reminds us of how much better it’s getting at extracting natural gas, coal and oil from once-hard-to-mine or hard-to-drill locales. There’s the ongoing increase in world population, and the rising standards of living for millions in Brazil, China, India, Russia and elsewhere. The bottom line, though, is that the business-as-usual path we’re on today — however technologically advanced and efficient it already is — is still leading to a future in which we use more of every form of energy we can.

As Virgin’s Sir Richard Branson puts it in his latest book, Screw Business as Usual, it’s high time we stop that. With growing pressure from everything from rising, price-driven fuel poverty in places like the UK to record-high carbon dioxide levels around the world, the future rests on finding ways to start doing more with less ... and fast.