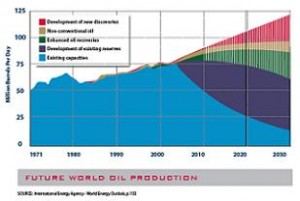 Late last month, a group of national security strategists, top researchers and analysts gathered at the Kossiakoff Centre of Johns Hopkins University Applied Physics Laboratory in Laurel, Maryland, to discuss two big worries that many in the mainstream media might have you believe aren’t causes for concern at all: energy security and climate change.

The best way to sum up the symposium’s conclusions? Don’t listen to the chattering heads on talk radio and television: the military’s top brass know better … and with their knowledge comes considerable nervousness.

It’s not just the Navy, either. The US Joint Forces Command explored similar waters last month with the release of its Joint Operating Environment 2010 document (also known as JOE 2010), whose purpose is to “describe the future operational environment and its implications on the structure and function of the joint force.” (The Joint Forces Command is one of 10 Department of Defense combatant commands and oversees more than 1.16 million service personnel in all branches of the military.)

So what do top military experts say we should worry about? Here’s a top 10 list: