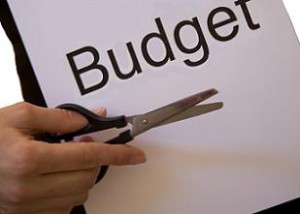 Cuts today and cuts tomorrow. Frontline cuts and bottom line cuts. Cuts that are gentle and cuts that take your legs off. I think we can all see what the dominant political motif is going to be in the run up to the UK’s general election next year. So where will all good, well-meaning greenies end up in this debate?

Historically, most environmentalists have never been drawn to the ideology of “the small state” — set taxes as low as possible and spend public money only when it’s absolutely necessary. They naturally gravitate towards the “protect public services” position — with many an envious glance towards our Scandinavian neighbours who seem completely at ease with the idea that people get the kind of society they’re prepared to pay for. By any standards, their societies do seem to work rather better than ours. But should we automatically assume that when it comes to public expenditure, it’s always a case of “the higher the better”?

I suspect there’s a strong, sustainability-driven case for a much “leaner and greener” take on many key areas of public expenditure — over and above the basic efficiency cuts that are undoubtedly available to any government. Having seen it from the inside over the last nine years (as Chair of the Sustainable Development Commission), I can say for sure that there are still too many aspects of central government that are scandalously profligate in the use of our money.

Let’s start with defence. This really has to be the moment where we renounce once and for all the vainglorious illusion that we are still a nuclear superpower. Getting rid of the whole Trident missile programme would provide the biggest and quickest “sustainability win” available. And once we’d swallowed that particular pill, scrapping the proposed new aircraft carriers and cutting right back on the Eurofighter would make it possible to target defence resources where they are really needed.

Next up, I’d be taking my green scythe to the sprawling surveillance “state within a state” and the various “database empires” that Labour has invested so much in over the last ten years. The crazy ID card scheme (with national identity register) would be the first to go. Then the National Health Service supercomputer. Then the new contact point database.

Sorry if I’m beginning to sound like an apologist for the Tories here, but their new policy paper on central databases and personal privacy actually makes a lot of sense. I’m astonished at how blasé most greens are about the increasingly intrusive impact of these on our lives. The recent report from the Joseph Rowntree Reform Trust, questioning the basic legality of many public sector databases, has barely been commented on by the big environmental NGOs.

Finally, there’s health. No longer “off limits” for the Government, and very much top of the list as far as the Tories are concerned. Behind the scenes, every Strategic Health Authority (SHA) in England is already engaged in pre-cut planning under the pleasing acronym of QUIPP — Quality, Innovation, Productivity and Prevention. This entails yet more millions of pounds, by the way, disappearing into the pockets of the big consultancies to help SHAs grasp the nettle.

I was amazed to see that second P (for Prevention) in there. Prevention covers better public health, reduced health inequalities, and what health professionals call “demand management” — as in making sure that people aren’t referred on to hospitals when they don’t need to be. This whole area doesn’t feature very prominently in today’s “National Illness Service,” commanding rather less than 4% of total spending. So full marks to the Health Secretary for getting that in there. But will he really bite the bullet in terms of redirecting remaining spending to tackle obesity and promote physical activity, better nutrition, better diets and so on? Because that is the only way to make major long-term savings in the health budget.

The Green New Deal group (whose 2008 report first got people talking about more sustainable routes to economic recovery – see “Crunch time for a green new deal,” Green Futures No. 71, p. 21) will soon be publishing a follow-up report on public expenditure and finances. Which is just as well. Because we certainly need a bit more ammunition to help frame how best to respond to this critical political debate.

Editor’s note: Jonathon Porritt is Founder Director of Forum for the Future. This piece originally appeared in Green Futures. Green Futures is published by Forum for the Future and is the leading magazine on environmental solutions and sustainable futures. Its aim is to demonstrate that a sustainable future is both practical and desirable — and can be profitable, too.

Editor’s note: This piece originally appeared in Green Futures. Green Futures is published by Forum for the Future and is the leading magazine on environmental solutions and sustainable futures. Its aim is to demonstrate that a sustainable future is both practical and desirable — and can be profitable, too.
Total
0
Shares
Share 0
Tweet 0
Pin it 0
Share 0
0LikesShare Post