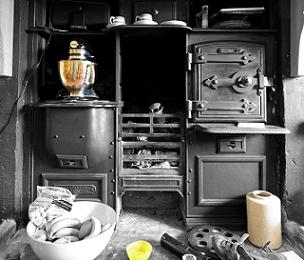 Shutters or clingfilm as alternatives to double glazing
English Heritage suggests boarding the windows with shutters as an alternative to double glazing. To be fair they’ve run the numbers in a document titled “Building Regulations and Historic Buildings.” Only high-performance double glazing performs better than more traditional approaches.

According the English Heritage, well-insulated single-glazed windows with night shutters perform almost as well (at night) as secondary-glazing and double-glazing with a 12-millimetre gap. The farmhouse walls are a metre thick at their thinnest point so there is plenty of room for internal shutters. They remain subject to investigation.

A second suggestion is less impressive. Plastic film and double-side tape are recommended as a low-cost seasonal alternative to double glazing. A sheet of heat shrink plastic is literally taped to the window frame and blow dried over the window. I have no idea whether clingfilm as a means of window insulation would be offensive to English Heritage or our local planners but I have no intention of finding out.

Balancing heritage and environmental design continues to be the biggest headache of the redevelopment of our 300-year Northumberland farmhouse.

Balancing historic detail vs insulation
We’re opening up the ceiling in a single-storey section of the farmhouse to take advantage of the double-height roof apex. The series of rooms off the kitchen was previously a barn and grain store; it was connected to the main house and modernised in the 1980s.

The planners want the wooden purlins in the roof structure to remain clearly protruding from the ceiling once the roof space is opened out. Aesthetically and historically it makes sense but every millimetre of space we lose to historic detail is a millimetre less insulation.

Any hope of using an environmental form of insulation such as hemp or sheep’s wool is gone. They simply would not provide an adequate insulation density. Instead we’ve got to compromise and look to modern materials.

Range restoration
One area of the building where there is no debate about the restoration of historical detail is the cast-iron range in the kitchen. Not because it has historical significance in its own right but because the wooden surround and concrete hearth that have been added are plain vandalism.

The range dates from the 1850s and was almost certainly cast in one of the now-defunct shipyards on the River Tyne in Newcastle. It’s a beast of a piece of kit that is almost the size of a small car. It gobbles firewood and takes the best part of half-a-day to get up to a cooking temperature.

Like the Redfryne stove that will most likely remain part of the kitchen post-development, it provides far more than warmth for cooking and heating. It’s a real-life working connection with the past that outstrips any debate over historic detail. And it’s the heart of the house both physically and emotionally.

3 thoughts on “The Grumpy Environmentalist: Restoring an 1850s range”