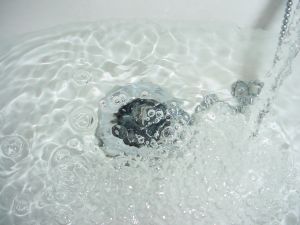 There can be no better way of developing an understanding of green issues than managing your own waste. And by waste I mean human waste that you flush down the toilet and not the contents your comparably sanitised kitchen bin.

Don’t get me wrong. Domestic recycling is great and we do that too — but managing your own human waste is truly an eco-badge of honour and provides an unavoidable connection with your personal environmental footprint.

In fact, I don’t think you can really claim to be green until you’ve dealt with one of the most fundamental aspects of eco-living. It’s an issue from which western city and town dwellers are completely disconnected.

Off grid means a disconnection not only from electricity, gas and water, but also the mains sewerage. There can be no doubt that managing a septic tank is one of the less pleasant aspects of living in a rural location.

We ignorantly ignored our domestic sewerage system for the first 12 months in the house.

Then, one Sunday morning, the kitchen sink started to gurgle and toilets wouldn’t empty when flushed. After lifting and peering down manhole covers we traced the blockage to the inlet into the septic tank.

Using a collection of drain rods borrowed from neighbours, we cleared several buckets of congealed fat and soggy toilet paper. Several days’ worth of stinking effluent that had backed-up behind the blockage shot into the septic tank.

Tank maintenance
It’s not an experience that I would like to repeat and so maintenance of the tank is now a monthly priority to remove solids that fill the tank.

A septic tank is a miniature sewage treatment plant. A well running system operates silently and creates no odour. It’s a 4,000 to 8,000 litre eco-system in its own right where anaerobic bacteria break down the waste in the tank.

Sewage enters the first chamber where solids settle and non-biodegradable products float. As we discovered fat, oils, grease and sanitary products are the enemy of septic tanks as they fill or block the inlet. Likewise chemical products disrupt the natural anaerobic process by killing the bacteria.

Liquid flows through the dividing wall into the second chamber and settles. Excess liquid drains from the outlet via a network of pipes into a seepage field.

A correctly specified tank should be large enough to breakdown all the waste from its site otherwise a periodic pump out is required and the contents must be disposed of commercially.

We needed a pump-out after initially neglecting our septic tank but are now managing the system carefully in a bid to avoid a repeat performance.

1 thought on “The Grumpy Environmentalist: Hold your nose”