The fastest turbo-boost pushbike in London 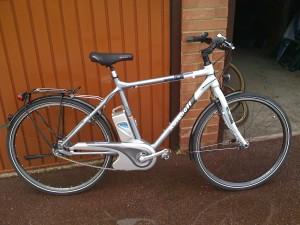 As we all know, electric bicycles are not more eco-friendly than regular bicycles.

But they are better than motorbikes, scooters, cars and freight trains. So Greenbang decided to give one a go.

This beautiful model here (a Kalkhoff Pedelec) was kindly lent to us by 50 Cycles (that’s 50 Cycles) for our review.

You can go bloody fast on this monster. Up to 15mph they say, but when Greenbang was pedalling, it felt more like 100mph. 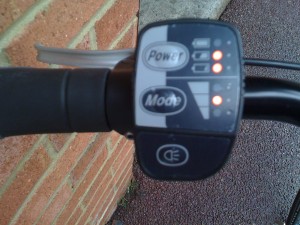 It’s very amusing going along at ease as the bike supports your cycling motions, to see other regular cyclists puffing away while you overtake them.

The bike is designed to be quite light, but can be a bit heavy if you have to carry it. The battery however, isn’t too heavy. You can take it off the bike (advised if you’re going to park it) pop it in your rucksack and go the the gym quite easily. You couldn’t really go for a long walk though – too heavy for that.

The battery you can charge in just a few hours and the best bit is that it stays charged for ages. Saying that, you need to plug it in to the mains. It doesn’t charge as you roll down the hill.

The bike gives you three speeds, economy (for girls), normal (if your name is boring), and turbo boost (if you are a fan of the Knight Rider and still pretend you can do the jumps when on your bike).

It does look a little bit twee, but it’s a very pleasant ride. The bell is loud and because the bike is electric, you get lights that come as part of the package.

So – in all – a great alternative to a bigger machine, but nothing replaces a good old bike for cutting your footprint.