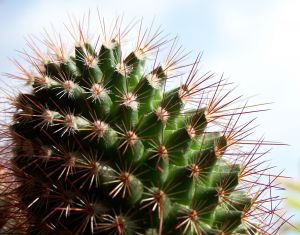 “Electric cactus” is more than a great band name (takers anyone?) … it could be the first step toward turning living plants into generators of clean, renewable energy.

Researchers at France’s Centre de Recherche Paul Pascal (CNRS) recently developed a biofuel cell that can generate power using the two main products of photosynthesis: sugar and oxygen. They then inserted the cell into a living cactus … and measured an energy output of 9 watts per square centimetre.

In fact, by watching the biofuel cell’s activity, the scientists were able to essentially watch photosynthesis in action and were able track real-time changes of glucose levels in a plant for the first time ever. They also observed that the electrical current produced by the biofuel cell increased when they turned on a desk lamp — sending more light energy for photosynthesis to the cactus — and went down again when they switched the lamp off.

The innovation potentially paves the way not only for a better understanding of how photosynthesis works, but opens the way for possible technologies that could convert solar energy into electricity with plant power. Such biofuel cells could also have medical applications — for example, an implanted cell could draw chemical energy from oxygen and glucose in the human body to help power a sensor for tracking glucose levels in a person with diabetes.

“(W)e demonstrate that with our electrodes we could harvest glucose and O2 produced during photosynthesis to produce energy, transforming sunlight into electricity in a simple, green, renewable, and sustainable way,” write researchers Victoria Flexer and Nicolas Mano in the latest issue of the journal Analytical Chemistry.