The 10 most water-stressed countries in the world

water70
From space, our planet might look like a “big blue marble” rich with water. On the ground, though, reality is different: water use in... 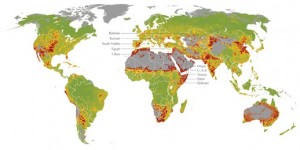 From space, our planet might look like a “big blue marble” rich with water. On the ground, though, reality is different: water use in many parts of the world has become unsustainable, threatening not only local populations but global agriculture and business as well.

Water stress has “major implications for global supply chains,” according to the risk analysis firm Maplecroft. The company’s Water Stress Index for 2012 maps global water use down to a resolution of 10 square kilometers, comparing renewable water supply from precipitation, streams and rivers with consumption for domestic, agricultural and industrial uses.

The 10 countries facing extreme risk nationwide are all in the Middle East or North Africa:

Other countries have subnational regions with extreme water stress. They include:

“The impacts of weather patterns on existing levels of water stress provide a vivid indication of future areas where conflict or unrest may emerge over access to water,” Beldon says. “For instance, the Argentine government’s plans to increase significantly extraction of natural gas reserves through hydraulic fracturing (‘fracking’) which will require huge amounts of fresh water. Future La Niña events will compound levels of stress in agricultural and energy-producing belts, potentially creating significant tensions between users.”