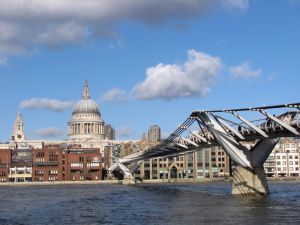 Greenbang is reassured she isn’t likely to die from a tsunami rolling up the Thames like in the film Deep Impact.

The findings of a Met Office and Environment Agency (EA) study say current government predictions and previous flood scenarios are realistic and that London won’t be submerged under water any time soon.

The Estuary 2100 Project found sea level rise in the Thames over the next century due to thermal expansions of the oceans, melting glaciers and polar ice is likely to be between 20cm and 90cm.

But there remains much uncertainty about the contribution of polar ice melt to sea level rise. By their most extreme estimates it may cause levels to rise by two metres.

The good news is that climate change is less likely to increase storm surge height and frequency in the North Sea than first thought. Future peak freshwater flows for the Thames could increase by around 40 per cent by 2080.

“Having greater clarity on things such as storm surge frequency is tremendously valuable and not just from a scientific point of view. This research will help to direct investment where it is most needed to manage the impacts of climate change.”

In practical terms the results of the study mean the EA will be able to scrap plans for a tide-excluding estuary barrage, saying it should be possible to manage water levels through more sustainable means.

The EA commissioned scientists from the Met Office Hadley Centre, the Proudman Oceanographic Laboratory as well as the Centre for Ecology and Hydrology to carry out the study.