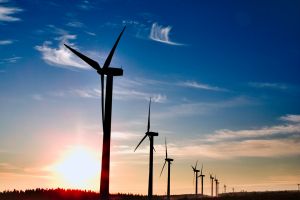 Greenbang has been trying out her southern drawl, y’all. The belle of the green world is paying close attention to the Wind Power Conference that has, excuse the pun, blown into Houston, along with 10,000 wind power industry execs.

Reportedly, high on the annual conference’s agenda is transmission capacity, also known as ‘oops I didn’t put enough power lines in there’. Current estimates suggest thousands of wind turbines are not meeting their generating capacity because of the limit in power lines and a $6.4bn proposal to rectify it is currently proving politically controversial.

And Texas, the former oil state, in particular is feeling the pinch. The state, having realised its oil reserves were dwindling, has realised its flat plains are great for wind farms and two years ago overtook California as the state with the biggest wind generation capacity.

The conference swings into town in the same week that the US Senate has opened a controversial debate on alternative energies that is reportedly putting the presidential candidates on the spot. Bush is currently to quash the debate stating: “the idea of a huge spending bill fueled by taxes (sic) increases isn’t the right way to proceed.”

Ironically, one of the most succinct quotes from the debate has come from the Governor of California, Arnie: “Climate change does not pause as Congress deliberates the proper way to address the challenge. I urge you and you and your colleagues in the Senate to work together for passage of a bill that, combined with the leadership of states such as California, can help form a truly national climate change strategy.”