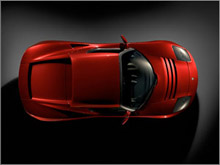 It’s got green credentials, it’s got style, it’s class and it’s got motor fanatics feeling slightly sticky from all the excitement: it’s the Tesla Roadster. So what’s the one thing that it doesn’t have? An airbag.

According to the Detroit Free Press, the feds have given Tesla a three year breather to get an airbag into the Roadster, after deciding that if the electric car maker had to do it up front, it might crush the car’s commercial prospects.

The National Highway Traffic Safety Administration said Monday that it would grant Tesla a 3-year exemption from the air bag rule, saying the company made an effort to comply and that the vehicle was still equipped with standard air bags for all passengers.

The agency said Tesla had operating losses of $43 million from 2002 to 2006, and that denying the request was “likely to put Tesla out of business in the U.S. and potentially worldwide.”

The Roadster is achingly close to hitting the roads – according to Tesla, it will be out in the wild from mid-March.

1 thought on “Tesla Roadster almost ready to hit the road”