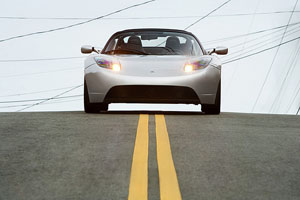 If you’ve been perusing electric car maker Telsa Motors’ blog of late, then you’ll already know what Greenbang is about to say. In that case, this article probably won’t interest you much and you’ll be sitting there smugly thinking “I already know this”. In which case, remember: nobody likes a smart arse. If you’re not in the habit of reading the blog, then boy oh boy does Greenbang have a hot news potato for you.

According to the blog, Tesla has just finished making its fifth car. Five – you might be thinking – I thought they were meant to be doing one a week. Reader, you’re on the money: things aren’t going as fast as Tesla would like. But don’t worry, it’s all part of the Tesla master plan.

Here’s what Tesla had to say in a letter to customers posted on the blog:

After an initial period of slow production rates, the pace of production starts to pick up until we are producing in excess of 100 cars per month by November. For this reason, the delivery of the approximately 600 2008 Model Year cars is weighted toward the end of this year and beginning of next year. […]

In the past 2 months, we have moved more slowly than our planned pace of 1 car per week. At the time of this writing, we are preparing to put cars number 6 and 7 on the line. This is by our own doing, as we have identified and addressed some minor supplier issues and teething pains. We expect to get back on pace so have not changed the overall schedule.

This is exactly the kind of situation we anticipated and is the reason for the slow initial ramp. In the early going, it is easier to address issues that inevitably crop up and then get back on track without major impact to the overall schedule. One thing is for certain: we will not sacrifice quality or customer satisfaction to force the schedule.

In other Tesla news, the company’s planning a special European model for next year for €99,000 and to set up service facilities in London, Paris, Munich (everybody talk about pop music) Northern Germany, Milan, Oslo and Copenhagen.