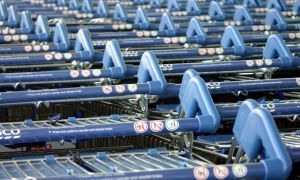 The index is compiled by The Climate Group and retailers fared this year’s index with Marks & Spencer coming second, followed by E.ON, the Co-operative and British Gas. Regular readers of Greenbang might well raise an eyebrow at those names on the index and we think it says more about the size of green marketing budgets the big corporations have.

Interestingly, respondents were asked which brands they regarded as taking a lead in battling climate change and two-thirds (66 per cent) were unable to name a single company.

But the research shows the wider general public and consumers continue to look to mainstream brands and not niche green specialists when it comes to fighting climate change.

Other findings of the research show more than half (53 per cent) of Brits think tackling climate change will boost the economy.

The results also show that as people tighten their belts they are more prepared to make changes to their lifestyle and spend extra time to fight climate change. But they do not want to pay a premium to go green, with only 13 per cent prepared to spend extra money.

“Clearly commitment to tackling climate change has strengthened for Britain’s cash-strapped consumers. The firm belief amongst individuals that fighting climate change will boost the economy suggests that people will expect business and government to stick to their climate change commitments through the current economic downturn and make it easier and cheaper for everyone to do their bit. It’s vital that, in the current situation, we seize the opportunity to tackle economic and climate issues together.”

The research questioned 1,000 UK adults and was commissioned by The Climate Group, in conjunction with brand strategy and design consultancy Lippincott and broadcaster Sky.

You can find the full report here.