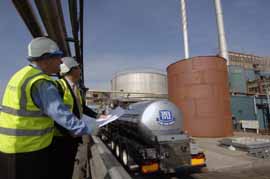 Tate & Lyle – the sugar company –  is building a £20m biomass boiler at its Thames refinery in London.

The new boiler will help slash the cane sugar manufacturer’s carbon footprint by 25% in less than two years, it claims.

Steven Hermiston, Sales & Marketing Director Tate & Lyle Sugars, said: “Cane sugar has always traditionally had a low carbon footprint.  Having recently confirmed what we’d already anticipated, that our carbon footprint is low at 0.43 tonnes per 1 tonne of sugar, we are now proud to be taking steps to reduce that even further with this project.  This is more than a  pledge  –  it’s happening now, with construction already started.

“We believe the boiler being constructed at our Thames site is not only the largest of its kind for London, but also a first for the UK food and drink industry.”

The new biomass boiler will mean Tate & Lyle can switch to renewable biomass to supply 70% of the energy needs of its London refinery.  Post 2009, with the boiler working at full capacity, the carbon footprint of cane sugar produced at the UK refinery will be reduced to 0.32 tonnes per 1 tonne of sugar.

Commenting from the Food & Drink Federation, Callton Young, Director of Sustainability and Competitiveness said: “Climate change is perhaps the biggest challenge facing the planet.  FDF is therefore absolutely delighted by Tate & Lyle’s plans for reducing the carbon footprint of its products at its Thames Cane Sugar Refinery.

“The planned 70% reduction in CO2 emissions associated with energy use is significant by any standards.  Indeed, it is exemplary.   It is exactly the sort of change in behaviour that FDF is encouraging under our Five-fold Environmental Ambition launched last month.  If more companies follow Tate & Lyle’s example, a low carbon economy will quickly cease to be an aspiration and become a reality.”