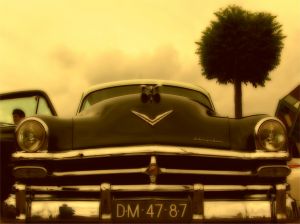 Anyone reading the newspapers over the last few days can’t fail to have seen the news about the dire straits the US car manufacturing industry is in as credit dries up and people stop buying new cars – especially the kind of gas guzzlers Chrysler, Ford and GM have been churning out in recent years. Here’s a great piece from John Gartner over at the Matter Network:

All eyes will be on Washington DC Tuesday as the big three automakers, the United Auto Workers union, and the mayors of towns with auto plants plead their case for a federal bailout of the auto industry.

Whether or not the government should grant additional loans depends on answering three questions:

How important is the auto industry and its millions of jobs to sustaining the American economy?
Will these new loans result in a tangible shift in the auto industry’s perspective and impact on climate change?
Will additional government oversight result in a more sustainable future?

The auto industry is getting attention from legislators during this financial crisis well beyond impact of the 2.5 million affected jobs. Democratic senators are lining up in support of an auto bailout because the UAW is staunchly democratic. In a perfect world the senators would not let that fact outweigh a rational decision, but that’s not the political world we live in.

Letting Ford, Chrysler and GM fall into bankruptcy would however, have a huge impact on the collective American psyche well beyond the layoffs. Foreign investors could become even more nervous, and markets around the world could accelerate their downward spiral. However, former GE boss and now business pundit Jack Welch reasonably argues that bankruptcy aimed at reorganisation would be the best thing for the auto industry: But reorganisation would open the doors to meaningful structural change through the renegotiation of contracts with creditors, dealers, and unions. And it would offer better odds of paying back taxpayers.

This leads to the second question: Would transportation’s impact on climate change be better served by government intervention that seeks to steer the auto industry towards more fuel efficient vehicles, or would a further battered auto industry (likely selling fewer cars) become greener out of the desperation of being on the brink of collapse?

The first thing that the auto industry must do when addressing Congress if it wants a bailout is to contritely and unequivocally admit that it was wrong for business and environmental reasons to continue to push large SUVs and ignore the market for fuel efficient vehicles when the science of climate change as well as consumers were moving in another direction. It is difficult to sympathise with GM’s financial plight when Bob “the denier” Lutz continues to deride humanity’s contribution to climate change. The auto industry must wholeheartedly acknowledge that their future depends on a radical shift towards competing with international competitors with fuel efficient vehicles, plug-in and electric vehicles, and leaner operations. With or without a bailout, this is their only hope.

The final question goes well beyond the scope of the auto industry and is far from being answered. What is government’s role in fostering a sustainable future? Do we hope that capitalism continues to move towards sustainable principles and allow the federal government to act only to level the playing field by assigning the appropriate costs to emissions and other environmental impacts? Or, does it take a more active role in guiding individual industries on how they should meet sustainable goals?

The Democratic Congress and the White House are of opposing opinions on this question, according to the LA Times:

To get loans, companies would have to submit detailed plans on how they would use the money to ensure “long-term financial viability,” stimulate US production and “pursue the timely and aggressive production of energy-efficient advanced technology vehicles.” The money would also come with limits on executive pay and a ban on stock dividends until the loans were repaid….

Instead of using the $700bn financial rescue fund to help automakers, the White House has proposed easing rules on a $25bn loan program approved by Congress last year to help Detroit retool factories so they can produce more fuel-efficient and environmentally friendly vehicles. Congressional Democrats say diverting that money would hurt US automakers’ efforts to become more competitive.

This final question will continue to be debated for many years as we grapple with how to coax the free market into making sustainable decisions.