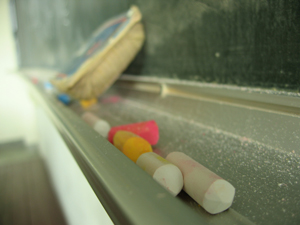 Schools and sustainability? Must try harder, seems to be the report card from watchdog Ofsted. If they carry on at this rate, they’ll have to go and stand in the naughty corner.

While schools should be teaching the future leaders of Britain to be greener than Kermit the Frog, the reality isn’t quite as promising. “Some schools are already leading the way in encouraging pupils to be green, but most have limited knowledge of sustainability and place little emphasis on teaching or promoting it,” says Ofsted.

Pah. And all this with the government’s sustainable schools framework looming in 2020 too. (As a side note, Ofsted found few schools knew anything about the framework. You can find out more here if you’re in the dark too).

Here’s some highlights (lowlights?) from the report:

But Greenbang doesn’t like to leave it on a bad note. Here’s some of the good examples of sustainability found by Ofsted:

By monitoring meters, pupils in a primary school had ensured average savings of £50 per week on electricity bills. They were now going to extend this activity to water meters.

In another school, Year 2 pupils could explain that the more electricity they used, the more fossil fuels would need to be burned to produce it. Therefore it was important to turn off lights, computers and other electrical apparatus when not in use. They recognised that their actions could have wider implications. They understood that two local wind farms also generated electricity and realised that these had prompted differing reactions from members of the local community.

In a third school, pupils had studied wind farms and made and investigated model turbines in science and design and technology lessons. They expressed their views with passion and enthusiasm and showed considerable depth of understanding.