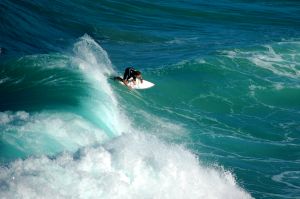 He may drive an SUV, but it seems the mayor of San Francisco is seeking to enhance his green legacy before leaving the office.

The city’s figurehead, Gavin Newsom has already accepted an award from ICLEI, a local government sustainability body, for the city’s effort to combat climate change – the emissions are apparently down five per cent on 1990 level. And, not content with this, he’s now turning his attention to wave power.

“I don’t want to leave office — and I have to at a certain point — without having a pilot demonstration project actually in the water, generating electricity … I’m not leaving this particular office, even if it means running for Contra Costa supervisor, until this is done.”

San Francisco will start to test Ocean Beach’s wave-power potential later this month. It seems like a healthy attitude to take but there may be protests from the resident surfers.