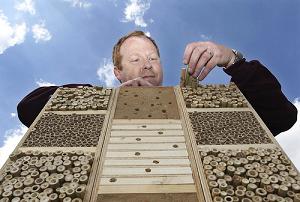 While many of us might worry about the dwindling bee populations across the UK, US and other places, a British supermarket chain is testing a unique strategy to help bring bees back: rooftop bee “hotels” on its stores.

Sainsbury’s has recruited what is says is “retail’s first ever bee keeper” to help with the effort.

Robin Dean, a bee expert, is working with the chain to set up and maintain a network of bee hotels at 38 Sainsbury’s stores across London. The bees are solitary, not honeybees, so aren’t likely to create problems for shoppers, Dean said.

“Solitary bees are different to honey bees,” he said. “They live in isolation rather than as part of a hive. They don’t make honey, so have nothing to protect, making them docile and very unlikely to sting, so customers need not worry!”

While the bees won’t produce honey, Sainsbury’s is hoping they’ll boost the local population of pollinators that’s so vital to growing fruits and vegetables.

“Bees are the unsung hero of the food chain, as most fresh fruit and veg depends on bees for pollination,” Dean said. “We hope that by setting these bee hotels up at a network of stores across the city, we’ll be able to help rejuvenate the bee population, and learn more about why the population has decreased so dramatically over the past few years.”

The hotels are designed to offer an ideal habitat for bees to raise larvae. Dean then plans to collect the larvae and incubate them until they’re ready to hatch, upon which he’ll bring them back to the hotels.

This isn’t the first bee-friendly initiative Sainsbury’s has undertaken, either. In 2005, the retailer partnered with Syngenta to launch Operation Bumble Bee, a programms to sow a specially-designed bumblebee seed mix into areas of farmland. The mix of vital pollen- and nectar-producing plant seeds has since been sown over 500 acres.

Sainsbury’s also  introduced several trial bee hotels at its eco-store in Dursley earlier this year. Solitary bees have since taken up residence, attracted by the specially sown wildflower meadow planted around the store.

“We recognise that if we are to continue to sell fresh British produce in the long term, we are going to have to look at the problem of declining bee population and do our bit to help solve the problem,” said Neil Sachdev, Sainsbury’s commercial director. “When we’ve gained an understanding of how well the bee hotels work in these stores, we might well consider making them a standard feature of Sainsbury’s supermarkets nationwide.”

Once the London store hotels are up and running, Sainsbury’s hopes to recruit a student to fill the role full time as part of a masters degree on biodiversity, with results being fed into several EU programmes looking at long-term trends in species diversity.