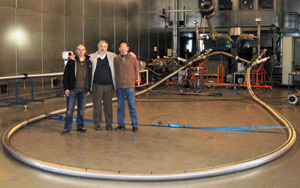 Researchers in Spain have developed a superconducting electric cable that could cut energy losses across parts of the grid by 50 to 70 per cent.

The 30-metre cable, as well as the terminals to connect it to a network, was constructed using a high-temperature superconducting material called BSCCO. The team that developed it says it’s the most advanced electric cable yet built in terms of its distribution capacity: it can transport five times more electrical strength than a conventional copper cable of the same dimensions.

The new cable was developed by researchers at Universitat Autònoma de Barcelona, ICMAB-CSIC, and the firms Labein Tecnalia and Nexans. The project was coordinated by the electrical company Endesa.

Such superconductor technology could dramatically boost the efficiency of electrical systems, which currently channel 40 per cent of the world’s total consumption of energy (and energy demands are expected to double by the second half of this century).

According to the research team that developed the new cable, transporting electricity with superconducting materials could help greenhouse gas emissions even both global population and energy use increase. In fact, superconductor electrical systems could cut primary energy consumption by 10 to 15 per cent with no decrease in final user consumption. That’s because of the vast amount of produced energy that’s now wasted — some 60 per cent.

In Catalonia, for example, building a superconductor electric network would reduce carbon emissions by 500,000 tonnes while still meeting a yearly energy demand of about 40,000 gigawatt-hours.

Superconducting cables could also increase network security and reliability, as such transformers are non-flammable.