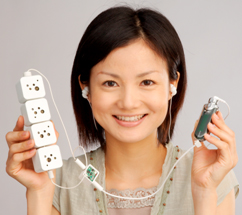 The boffins at Sony appear to have come up with a way to power their gadgets with good old sugar (release here, but in Japanese). White or brown, wonders Greenbang?

Right now, it appears to require the user to accompany their dinky little MP3 player with a huge fuel cell, but we guess it’ll shrink over time, just as the players themselves have.

But why not just switch to crank-powered gadgets, asks EcoGeek?

It’s difficult for me to imagine, however, that it’s ever going to be simpler or more efficient than turning sugar into electricity using the intermediary of my muscles. Crank powered gadgets just make more sense.

Actually, part of the reason why not became obvious to Greenbang last weekend, as he holidayed in the Lake District: laziness. Standing in line to buy some hiking gear, someone in front of him was returning a wind-up torch and mobile phone charger, on the basis that it took more effort than expected. Nice.