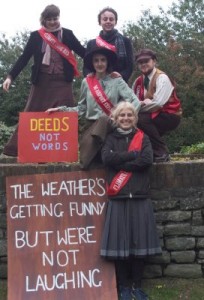 The Sufragettes movement lives on – celebrating the 100th anniversary of the Suffragettes’ rush on Parliament, the Climate Rush will call for an end to airport expansion and for tougher environmental measures to control CO2 emissions.

The Climate Rush takes place on Monday 13th October and, instead of demanding votes for women, they will demand climate action. The rally has the support of organisations across the capital, including the Womens Institute (WI) and Oxfam.

Some of the women speaking at the event include former newspaper editor Rosie Boycott, Green Party leader Caroline Lucas, Joy Greasley from the WI, Sam Roddick and Baroness Tonge.

They are protesting airport expansion, coal-fired power stations without carbon capture and storage and are calling for a cross-party coalition to create climate policy in line with the most recent research.

“The Suffragettes won us the right to vote, but scientists tell us that in less than fifty years time those rights, won less than one hundred years ago, will be meaningless. The world we know won’t exist unless we take action now. We’re the last generation who will be able to slow down climate change and I believe future generations will judge us if we do nothing to rise to the challenge.”