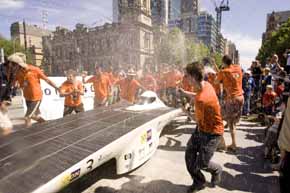 Students have won a solar-power car race that spans Australia.

The Panasonic World Solar Challenge runs from Darwin to Adelaide – more than 3000km of some of the most remote land on Earth:

Wired Magazine says the students managed it in 33 hours:

The winning team, 11 students from Delft University of Technology, spent 11 months developing the Nuna 4. It is about 15.5 feet long, weighs about 419 pounds and has 65.5 square feet of photovoltaic solar panels.

The Nuna 4 completed the week-long race across the continent from Darwin to Adelaide in 33 hours at an average speed of 56.46 mph. They reached Adelaide 96 minutes before Belgium’s  Umicore Solar Team.