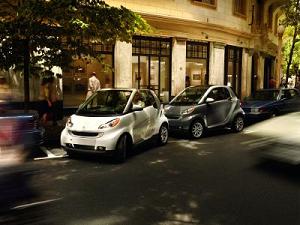 As the age of easy oil fades away and the era of accelerating climate change gets under way, it might be time to stop waiting for “silver bullet” technological breakthroughs to save us and instead start working harder with what we’ve already got.

That’s what researchers at the University of Oxford concluded after studying the best ways to reduce transport-related carbon dioxide emissions. They say that, for the short term anyway, rather than thinking big thoughts about an electric or hydrogen-powered auto revolution, we should be thinking small … as in much smaller, lighter cars.

“The most significant impact that can be made in reducing CO2 emissions from automobiles in the coming decades is reducing the average weight and engine size of vehicles,” the authors write in their study, “Future of Mobility Roadmap.”

“We conclude that road transport will continue to rely on the internal combustion engine, in an optimised, classic or hybrid set-up. Electric vehicles will remain a small percentage of the overall fleet composition up to the medium- to long-term. When combined with a drastic downscale of both vehicle size and weight, a significant reduction of emissions from road transport could be achieved, especially in combination with low carbon fuels.”

The researchers at Oxford’s Smith School of Enterprise and the Environment concluded that both electric and hydrogen vehicles are likely to remain niche products for many years because of technological and resource limitations. For example, limited battery life remains a drawback for electric cars at the moment, while mass production of hydrogen cars would drive up the price of already costly platinum — needed as a catalyst — to the point such vehicles couldn’t be competitive on the market.

While making the case for smaller, lighter conventional cars, study editor Sir David King and lead author Oliver Inderwildi are also urging the government to impose higher taxes on drivers of large, inefficient vehicles. Those funds could be reinvested in better public transport and measures to get more people cycling and walking, they say.

“There is ample opportunity for emissions reductions by further improvements of currently available technology combined with a change in user habits,” Inderwildi said.