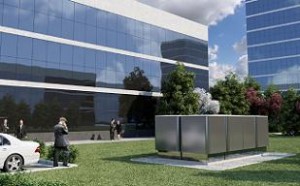 The solid oxide fuel cell (SOFC) technology is designed to let business and home customers create their own electricity on site. While Bloom Energy has until now operated in stealth mode, its fuel cells are already being used by a number of large commercial enterprises, including Bank of America, Coca-Cola, Cox Enterprises, eBay, Google, FedEx, Staples, and Walmart.

The company says it is “committed to changing the way people generate and consume energy.” It launched today during an event hosted today at eBay headquarters that was attended by, among others, California Governor Arnold Schwarzenegger and General Colin Powell.

Bloom Energy claims its technology is fundamentally different from standard hydrogen fuel cells. According to the company, the Bloom Energy Server uses lower cost materials, converts fuel to electricity far more efficiently, can run on a wide range of renewable or traditional fuels, and is more easy to deploy and maintain.

Each Bloom Energy Server unit provides 100 kilowatts of power in roughly the footprint of a parking space. Each system generates enough power to meet the needs of approximately 100 average US homes or a small office building. Larger customers can add more power by deploying multiple units side by side.

The company says its systems can pay for themselves in three to five years. Depending on the fuel used, the Bloom Energy Server can also help reduce a user’s carbon footprint by 40 to 100 per cent.

The first commercial installation of such a unit took place in July 2008.

“We believe that we can have the same kind of impact on energy that the mobile phone had on communications,” said KR Sridhar, principal co-founder and CEO of Bloom Energy. “Just as cell phones circumvented landlines to proliferate telephony, Bloom Energy will enable the adoption of distributed power as a smarter, localised energy source.”

Founded in 2001, Bloom Energy was born out of Sridhar’s experience at NASA, where he helped work to develop technology that could use solar energy and water to provide air for breathing and fuel for transport.

One of the first companies to try out Bloom Energy’s technology was eBay.

“When Bloom came to us, it was an easy decision to become an early-adopter of their cutting-edge new technology,” said eBay CEO John Donahoe. “As a result, we’re meeting financial and environmental goals with the project while fueling a more energy efficient global marketplace. That’s good for us, our customers and the planet.”