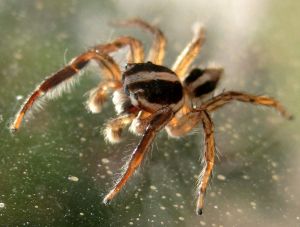 Inspired by spiders, researchers in Florida have come up with what they say is a “nearly perfect” water-repelling surface.

Their innovation is based not on a unique chemical compound but on physics: by reproducing the tiny and random structure of the hairs found on spiders, engineers at the University of Florida say they could in theory turn almost any material — even water-thirsty sponges — into a surface that sheds water better than wax, glass or Teflon.

The discovery promises to be more than an intriguing novelty, says Wolfgang Sigmund, a professor of materials science and engineering. A near-perfect water-repelling surface is essentially a self-cleaning one, as water picks up dirt before rolling off. That could make the new development ideal for food packaging, windows or even solar cells that need to stay clean for maximum efficiency. It could also be used to coat boat hulls to make boats faster and more efficient.

Sigmund began research in this area about five years ago, when he turned to spiders for inspiration on his experiments with microscopic fibres. Biologists have long noted how spiders’ unique covering of microscopic hairs lets them stay dry and even avoid drowning. Studying a colleague’s work, Sigmund learned that those hairs aren’t uniformly shaped and distributed, but are both long and short, and variously curved or straight. So he decided to try to mimic those structures using plastic hairs varying in size but with an average size of about 600 millionths of a metre.

Once he had his test surface, he was surprised by the results. The chaotic array of micro-hair proved to result in a “nearly perfect hydrophobic interface.”

“Most people that publish in this field always go for these perfect structures, and we are the first to show that the bad ones are the better ones,” Sigmund said. “Of course this is a finding in a lab. This is not something you expect from theory.”

While plenty of other water-repelling surfaces and compounds have been developed in labs, Sigmund says this new one might be one of the most water-phobic ever. Close-up photographs show that water droplets on the surface maintain a spherical shape, unlike droplets on other surfaces that bulge downward or drag a kind of tail as they move.

The new surface also repels both cold and hot water, and can also be tweaked to become an oil-repellent.

Sigmund says more research is still needed to make sure the surface can be made hardy enough to resist damage over time, and to find a way to reliably produce the surface on a commercial scale. Still, the innovation is already attracting attention from the business world.

“We are at the very beginning but there is a lot of interest from industry, because our surface is the first one that relies only on surface features and can repel hot water, cold water, and if we change the chemistry, both oil and water,” Sigmund said.