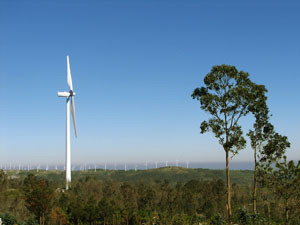 In Europe, it’s clearly the season for billions. Greenbang supposes billions are a bit 80s-style knitwear, toy dogs and rucksacks worn over both shoulders – they never go out of fashion on the continent, really.

After Dutch energy company Econcern promised to invest €12 billion in green power, now Spanish utility Iberdrola is getting out its cheque book.

Iberdrola has promised to put a whopping €8.6 billion into the US renewable energy market between 2008 and 2010.

And what will that sort of spending get you, apart from a very worn out cheque writing hand? Apparently, Iberdrola wants to get a 15 percent share of the US renewables market by the end of the decade.