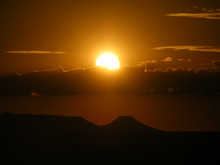 It seems if you’re in solar at the moment, just shake the nearest tree and a VC with a big fat wad of cash will drop out, fall to his knees and ask to buy a stake in your company. Today’s tree shaker is Solel, an Israeli solar panel maker that specialises in parabolic troughs.

Solel, which is in the middle of constructing 150MW of solar thermal plants in Spain and already has a supply agreement with PG&E, has just revealed it’s attracted $105 million in financing from Ecofin.

Solel is the world’s largest solar thermal company with over 20 years experience in the sector. It specialises in the commercially proven technology – parabolic troughs which have been operational since 1985 in the Mojave Desert. These nine solar energy generating system (“SEGS”) plants produce 354MW of clean, renewable electricity per annum using Solel equipment and technology. They supply the needs of half a million consumers and eliminate the need for 2 million barrels of oil a year.