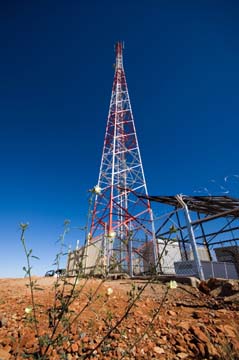 Here’s a shot of a solar-and-wind-powered mobile phone mast put up in Namibia. It was developed at Motorola’s Innovation Centre in Swindon, UK.

Apparently it is not just developing markets where Motorola predicts a market for these. Remote locations in the developed world face the same problems, where diesel powered GSM cell sites are not uncommon. One UK operator, for example, has more than 600 diesel powered cell sites that are expensive to operate and subject to fuel theft.

Having established a network in urban areas, and about to face competition from new entrants, MTC [Mobile Telecommunications] Namibia’s strategy is to grow its network in more rural parts of the country. Because Nambia is sparsely populated country with a lack of infrastructure, creating a national network comes with its problems.

“It costs us $8K per km, and 12-18 months, to connect a new cell site to the electricity grid. Even then the power supply is unstable, and electricity costs are forecast to rise 40 per cent over the next 3 to 4 years.” Jochen Traut, CTO, MTC Namibia

Looking for an alternative solution, MTC Namibia, working with Motorola and the GSMA, is converting a GSM cell site that is currently connected to an electricity grid to run solely on wind and solar power. The cell site will remain a part of MTC Namibia’s current wireless network and continue to carry the same levels of traffic.

The four month trial, during Namibia’s winter months, will enable Motorola to optimize the cell site’s power consumption, wind and solar power generation and battery reserves. Having proved the concept and refined the design, MTC Namibia then expects to make a significant push into rural areas using wind and solar powered cell sites.