Solar plane – round the world with no fuel 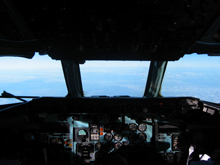 What’s the bravest thing you’ve ever done? Parachuted out of a plane, maybe? Mooned in crowded pub? Shut your eyes while you’re driving at 80mph? Tell your partner you didn’t like the dinner they just spent hours slaving over? Pah. Wuss. Try becoming an adventurer and flying around the world in a plane with no fuel.

Which is just what adventurer Bertrand Piccard (surely adventurer is the coolest job title in the world) is planning to do.

The International Air Transport Association has become a partner of Solar Impulse, a solar plane venture which is going to circumvent the globe with in an aircraft producing no emissions and using none of the normal carbon spewing diesel required. The twosome are all about cooperation now, apparently, and IATA will help Solar Impulse in its round the world mission by getting air clearance for the journey.

The first flights for the solar-powered plane will happen next year and by 2011, Bertrand Piccard and André Borschberg, CEO of Solar Impulse, will do the flight around the world.

Greenbang officially thinks this is the coolest thing ever. Roll on 2011.