Solar: four times the bang for your buck 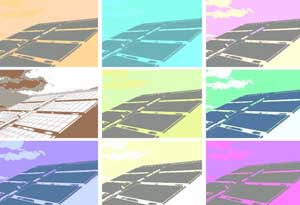 It seems to be a small world. Greenbang, it would seem, was not the only person discussing the aesthetics of solar panels last week. HP was too but is apparently looking to change the way the solar panel fields look.

The technology firm has just announced an agreement with solar energy system developer Xtreme Energetics (XE) to develop a solar energy system that, according to the press release ‘can be artistically patterned to mimic the appearance of any building material or terrain for aesthetic appeal.’  Greenbang would like an Andy Warhol panel please.

The technology does, however, come with some impressive features. First and foremost, the company claims the technology is twice as efficient and costs half as much as traditional solar panels. And the press release goes on:

The flat design of XE’s system eliminates the need for mechanical tracking of the sun as it traverses the sky… This low-profile design also overcomes the persistent dilemmas of mechanical solar trackers, which cast shadows onto themselves, require large maintenance costs and are vulnerable to high winds, making rooftop installations especially difficult.

XE’s CEO said the technology would work for, “both the central utility and rooftop markets.”