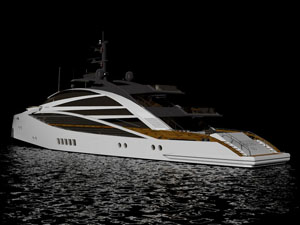 Do you have more money than sense? Why not spend your money on a yacht? More money than sense but with a pang of environmental conscience? Then you might want to treat yourself to an eco-yacht from Sabdes. Or spend your money on buying up spare rainforest and putting it into trust for eternity, but that’s not going to impress supermodels and hangers on.

Back to the yacht. Sabdes has taken the covers off its latest big kahuna of a boat, called the Sabdes 50M, which it promises is “efficient in fuel and emissions, with an intent to be environmentally sensitive in both the vessel’s building and cruising life”.

But how, you might ask? It’s bigger than most people’s houses – how can it be eco-friendly, you might also ask?

The easily driven hull is propelled by a hybrid diesel-electric system, and offers a much higher cruise speed than an equivalent length displacement yacht. The propulsion system uses a shaft motor/generator designed to put surplus energy back into its battery banks. The yacht’s total power consumption will be kept to a minimum by careful consideration of every technical element throughout; for instance, the vessel will have LED lighting, there will be more reliance on natural cooling to support the air conditioning system, and insulation and window materials are carefully selected. At anchor or in port, silent running can be achieved, by switching off the generators and running on the main battery banks. The vessel also has the ability to silently manouver [sic] in and out of harbour, by using its retractable bow and stern thrusters for propulsion.