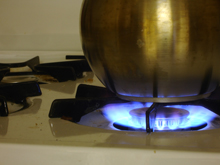 Just a quickie for you here: Defra has put out the latest results of its studies on the UK’s greenhouse gas emissions by person, gas, industry and so on. Wondering how we’re doing? Read on, for Greenbang has picked the tastiest stats for your emission degustation…

In 2007, UK emissions of the basket of six greenhouse gases(1) covered by the Kyoto Protocol were provisionally estimated to be 639.4 million tonnes carbon dioxide equivalent(2). This was 2 per cent lower than the 2006 figure of 652.3 million tonnes.

Carbon dioxide (CO2) is the main greenhouse gas, accounting for about 85 per cent of total UK greenhouse gas emissions in 2006, the latest year for which final results are available. In 2007, UK net emissions of carbon dioxide(3) were provisionally estimated to be 543.7 million tonnes. This was 2 per cent lower than the 2006 figure of 554.5 million tonnes. The decrease resulted from fuel switching from coal to natural gas for electricity generation, combined with lower fossil fuel consumption by households and industry.