Smart meters: not coming to a home near you anytime soon 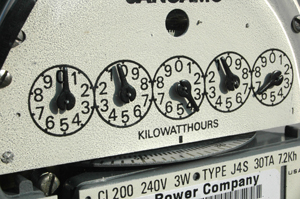 Could you imagine going into a supermarket, plonking your shopping down at the checkout only for the cashier to scrunch up her face, scratch her chin in contemplation, then say ‘Yeah, that’ll be 80 quid please” without ringing it up on the till? Could you? I don’t know about you, but Greenbang likes to know what she’s paying for and that she’s paying on the nose and no more.

Well, this same estimate approach to working out your electricity and gas bill will continue for the foreseeable. The government has decided to not back proposals suggested in last year’s Energy White Paper to compell energy companies to provide their customers with ‘smart meters’.

Unlike your traditional display only meters, Such smart meters could provide up-to-the-minute info on how much electricity and gas you’ve burnt your way through and the size of the carbon footprint you’ve made. This info could be beamed to your laptop, mobile or straight to your brain (probably, when the technology is ready).

According to the Energy Retail Association, smart meters are what the Great British public is crying out for. It’s own YouGov poll found that 82 percent of us aren’t down with the ‘guestimate’ system of billing and would rather have smart meters to tell us what we owe.

So the government won’t introduce mandatory smart metering. Here’s what it will do though:

The Energy Retail Association, rather than being a bit disappointed about the whole lack of meters, has turned its frown upside down and said this, via its chief exec Duncan Sedgwick:

It is encouraging to see that the Government has listened to the concerns of both the industry and consumer groups and tabled an amendment to the Energy Bill that has effectively opened the door for smart metering. The Government’s backing for smart meters rather than the lesser prize of electricity display devices will also be vital in keeping costs low for consumers and providing customers with what they really want: accurate billing.