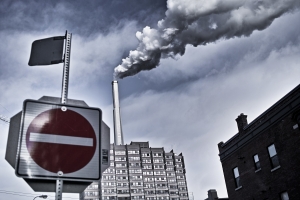 Think your puny efforts to switch off lights or wash laundry in cold water don’t really mean much in the large-scale picture of carbon dioxide emissions? Think again, says a British researcher whose painstaking study has found that policy-makers are wildly underestimating the impact of household conservation strategies.

The problem, says Adam Hawkes of the Grantham Institute for Climate Change at Imperial College London, is that — in the UK, anyway — government advisors are basing their figures on emissions from all types of power plants: not only coal, oil and gas, but wind and nuclear as well. But only the fossil fuel-burning plants have the ability to ramp up or down quickly to meet changing electricity demands, so they’re the only ones that should be considered when estimating the impact of household energy habits, Hawkes says.

“This means any reduction we make in our electricity use — for example, if everyone switched off lights that they weren’t using, or turned off electric heating earlier in the year — could have a bigger impact on the amount of carbon dioxide emitted by power stations than previously thought,” Hawkes said. “However, this also acts in reverse: a small increase in the amount of electricity we use could mean a larger increase in emissions than we previously thought, so we need to make sure we do everything we can to reduce our electricity use.”

Hawkes calculated that current estimates of the impact of simple conservation measures on carbon emissions could be as much as 60 per cent too low. He based his conclusion on an analysis of 60 million data points showing how much electricity was produced in each half-hour by every power station in the UK between 2002 and 2009. He also calculated the emissions of different power plants based on the fuel they used, and analysed those figures to determine how small changes in electricity demand would affect emissions from the fossil fuel power plants that respond to those changes.

By excluding low-carbon power sources like wind and nuclear, Hawkes determined the actual emissions rates in response to demand changes is about 0.69 kilograms of carbon dioxide per kilowatt-hour of electricity consumed. Government policies, however, are based on an estimate of 0.43 kilograms of carbon dioxide per kilowatt-hour. That, Hawkes says, means policy-makers are underestimating the potential impact people can have by reducing their electricity use.

“This is a very important study that could help policy-makers make more informed decisions to reduce our carbon emissions,” said Brian Hoskins, director of the Grantham Institute. “The government needs a good understanding of the figures it uses to support policy analysis, because this has a big impact on which technologies we employ to reduce our energy use. With a more accurate picture of what is going on, we will be much better equipped to tackle our carbon dioxide emissions.”