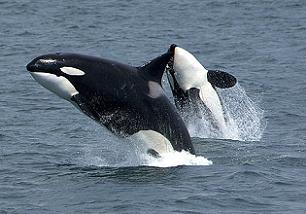 Creating conservation areas — even small ones — in the oceans could help better protect endangered whale species, according to the findings of international researchers.

Scientists in Scotland, Canada and the US describe their findings in a new issue of the journal Animal Conservation.

“There are enormous challenges associated with setting conservation priorities for such mobile and migratory species as whales,” said lead author Erin Ashe, a PhD student at the University of St Andrews. “However, the topic was important enough to bring together 200 managers, scientists, and government and NGO representatives from 40 countries for the first International Conference on Marine Mammal Protected Areas.”

The annual censuses conducted by the Centre for Whale Research indicate that the endangered southern resident killer whale population — found in the waters of British Columbia, Canada and the US state of Washington — now numbers only 87 animals. In addition to high contaminant levels, food limitation and repeated disturbance from boats represent serious threats to the whales’ recovery.

In the study, co-authored with Dawn Noren of the National Oceanographic and Atmospheric Administration’s (NOAA) Northwest Fisheries Science Centre and Rob Williams of the University of Washington, Ashe mapped locations where killer whales were observed feeding.

“Protecting even small patches of water can provide conservation benefits, as long as we choose the spots wisely,” Ashe said. “We followed individually recognisable whales for hours on end and mapped where they were engaged in resting, feeding and social activities.”

The team realised that feeding habitat is important to these whales for two reasons. Chinook salmon, the preferred prey of the whales, has also declined in the region and the whales are thought to be food-limited. Also, killer whales are more responsive to whale-watching boat traffic when engaged in feeding activities than when they are travelling.

The authors observed that these two conservation threats are linked, so mitigation measures ought to consider the threats simultaneously. They argue that management strategies to protect feeding hotspots should confer greater conservation benefit than those that protect habitat generically.

The team’s research identified a small area in which whales were almost three times as likely to be feeding as they were in the rest of the region. By interviewing managers and environmental educators, the team were able ensure their candidate area was large enough to be biologically meaningful while being small enough to allow effective management of human activities within those boundaries. This information could also be incorporated into NOAA Fisheries’ recent proposal to create a Marine Protected Area for killer whales.

For some species, critical habitat is immediately apparent from casual observation. Killer whales strand on special beaches in Patagonia in Argentina to capture seals. A few key lagoons provide obviously important breeding habitat for grey whales in Baja, Mexico. In most cases, identifying critical habitat for whales, dolphins and porpoise is complex, and requires statistical analysis.

“Zoning the ocean is a new concept and is rife with human conflict,” said Joe Gaydos, science advisor to Puget Sound Partnership and chief scientist for the SeaDoc Society. “Science is our most objective tool for balancing species recovery and human needs and work like Ashe’s is critical if we’re going to ask boaters and fishermen to leave important areas for the whales.”