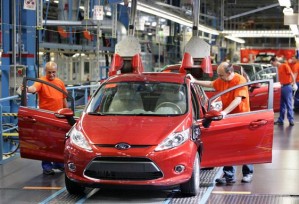 Has the American car maket finally realised that great things can come in small packages?

A release that came into Greenbang’s inbox this morning suggests that they might have – well, Ford might have at least.

The company has unveiled a new Fiesta, which will be built in Germany and ready for sale in 2010. According to the release:

“Today we are celebrating the start of a new era for our fabulous Ford Motor Company. The all-new Fiesta is an outstanding symbol for our One Ford vision of a single, global company designing and building cars for customers around the world. Be proud of what you have achieved and be proud of your contribution to a model that will get the world talking.”

If this is true then Ford will be putting a lot more of its effort into small, economical, more environmentally friendly cars. It will also be minimising its footprint by using renewable power too:

“Earlier this year, the Cologne plant began using renewable electricity generated by three hydro-power plants in Norway and Sweden, reducing the plant’s CO2 emissions by 190,000 tons a year. This initiative is part of the company’s overall commitment to further reduce the environmental footprint of its vehicles through their life cycle.”

More key bits from the release: