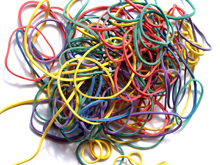 Ah, rubber: the stuff of welly boots, the bands that hold your newspaper together and gimps’ material of choice. Now welly-boot-wearing, newspaper reading gimps can be safe in the knowledge their love of rubber will shortly be having less of an impact on the environment after SiGNa Chemistry signed a licensing deal with Exxon Mobile to use the oil company’s catalyst patents, allowing SiGNa make greener rubbers.

The proprietary catalysts enable reaction efficiencies, cost reduction and safety improvements over the liquid bases and other solid catalysts that constitute the two conventional options for ENB production. With relatively low catalytic activity, liquid base counterparts require large quantities of the expensive materials to produce the desired reaction. Once the reaction is complete, the liquid catalysts also involve a complex, energy intensive recovery process that drives further inefficiencies and costs. Other known solid isomerization catalysts present their own handling hazards as their alkali metal content makes them susceptible to violent reaction and loss of activity upon contact with oxygen and water. Furthermore, the solid catalysts have comparatively poor isomerization performance with low conversion and selectivity. In contrast, SiGNa Chemistry’s newly licensed isomerization catalysts offer a stable, active mechanism for driving the ENB synthesis pathway.

Or, to put it another way, other isomerization catalysts can be dangerous to handle whereas those SiGNa has now licensed are much less fuss and will also let SiGNa save energy during manufacture, as well as using fewer materials in the process.