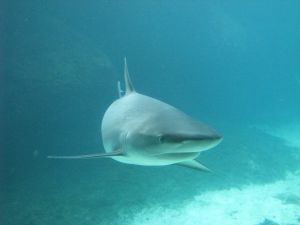 A nanomaterial-based paint inspired by the flow-efficient texture of shark scales could help reduce fuel consumption for airplanes and ships, and lead to wind turbines that spin with less air resistance and generate more energy.

Developed by researchers at Germany’s Fraunhofer-Gesellschaft, the paint is designed to not only diminish drag but to withstand intense ultraviolet radiation, high speeds and extreme temperatures ranging from -55 to 70 degrees C. It also offers a way to improve efficiency without added weight.

“Paint offers more advantages,” said Volkmar Stenzel, one of the members of the research team, whose work has just been recognised with the 2010 Joseph von Fraunhofer Prize. “It is applied as the outermost coating on the plane, so that no other layer of material is required. It adds no additional weight, and even when the airplane is stripped — about every five years, the paint has to be completely removed and reapplied — no additional costs are incurred. In addition, it can be applied to complex three-dimensional surfaces without a problem.”

While nanoparticles in the paint provide durability, it’s how the paint is applied that gives it its sharkskin-like quality. The researchers found that applying the paint using a stencil enabled them to recreate the texture that lets sharks cut through water so easily.

In tests at a ship-building site, the team determined the paint could reduce friction on a hull by more than 5 per cent. Over the course of a year, that equates to a potential fuel savings of some 2,000 tonnes for a large container ship.

If applied to every one of the world’s airplanes, the paint could reduce aviation-related fuel consumption by 4.48 million tonnes, which also means a reduction in carbon dioxide emissions.