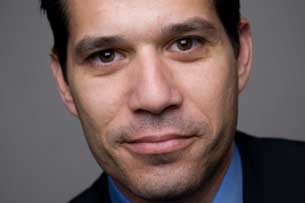 I first heard about Shai Agassi about a year ago when I wrote for the Financial Times about him leaving software giant SAP.

He’d quit as deputy CEO to move into the green-energy space. At the time, I was contemplating how to move from writing about tech and IT to eco-tech and green business, so he caught my eye.

Since then, Shai has made big waves around the world, wooing political leaders and taking centre stage at the World Economic Forum in Davos earlier this year.

His Project Better Place grabbed headlines in January, when it orchestrated a move between Renault-Nissan and the Israeli government, to provide an infrastructure and business model for electric cars.

Under the scheme, which Shai plans to kick off in five countries this year [you may wonder why he’s in London], the Israeli government is to provide tax incentives to customers, while Renault will supply the 50,000 electric vehicles, and Project Better Place will operate an Electric Recharge Grid across the entire country.

This is all promised to be in place by 2011, but a few lucky people will be driving the electric cars by the end of the year, he says.

He has come a long way since his recent exit from SAP.

“In the beginning, don’t forget it was sort-of a puzzle more so than a project – so I had a different job, I was in a different career,” he says. “A lot of people said ‘you must be out of your mind, you can’t do this thing’.

“I realised I needed to speak to the politicians; I needed to speak to corporations. So I circulated a white paper and used a lot of opportunities to talk to people. Really challenging myself on whether I’d be able to explain it to them; and in most cases it intrigued them enough they were able to give me guiding questions.”

Ideas then became a reality when Shai started talking to politicians and heads of countries. But the scale of his manoeuvres failed to daunt him:

“You realise fairly quickly that they’re just people like you and me,” Shai says. “The original idea was to get a country to fund this as sort-of a national project, and not a for-profit. It was very hard because the audacity of the goal sometimes gets confused with the impossibility of the goal.

“So when I got to Shimon Peres of Israel, current president, he started taking me by the hand and saying ‘lets talk to the industrialists, forget about governments. Governments have budgets, they have no money’.

“And he brought me over to talk to the industrialists, the big families and businesses in Israel, and I saw that they got excited.

“It was interesting because they didn’t think it’s impossible; they thought it was – even if you partially succeed, it’s still fantastic business. And I realised one of the things you need to do is to really get some people excited over the idea that they can make money that way.”

A telling sign that Shai once worked in the tech industry is that he now wants to build ‘virtual oil fields’ for this project to work.

He argues that an oil field is time-delayed, concentrated solar power where you get a lot of plants to soak a lot of sun, die and convert the chemical bonds that were in the trees into an oily concentrated matter – a process that takes a hundred million years.

But he wants to skip the molecular structure and move straight to on-demand energy where you generate exactly the same amount of electrons as the number that you use.

And not only that – Project Better Place has it in mind to change the business model of how cars are paid for, by taking inspiration from the utility-bill model the mobile phone operators have used.

“What we’re saying is, we buy the batteries and the infrastructure. We buy – it’s like bandwidth but what we sell you is kilometres which is what you really want. You don’t want to buy batteries. None of us likes to collect batteries but you do like to pay for a kilometre, especially if you can use it without creating any emissions.

“Now in the mobile industry, the longer you commit to buying minutes from the same provider, the more credit you get upfront. The way you get that credit is in the phone. And sometimes – it’s funny today, you can actually see in some mobile providers, they say “if you sign up with us, we’ll give you a free phone and a high-definition television.”

“So the credit is so much bigger than the phone today that they have to give you something else. In our model, you’re effectively getting – the longer you sign up, the more credit you get. In some cases you’re going to just get enough credit to get a free car.”

Too hot to handle?

But such large ambitions have been met with skeptcism for being too grand, under-funded (he has raised just $200m) and relying on the mobile business model, which some say stifles innovation and a free market. But that doesn’t put him off.

“If you don’t listen to criticism, you don’t learn and you don’t fix the model. Here’s a great lesson. The day before I presented to Shimon Peres, I presented to Bill Clinton. President Clinton, he’s amazing in the sense that he’s attentive, can grasp a concept very, very quickly.

“I showed him the whole idea, that the original idea was to sell electric vehicles and to reduce the cost of the mile, and go and convince people at the dealership that if you buy a clean vehicle you’d be a good person and it will cost you less to operate it but it’s a bit more expensive.

“At first, you want to lock your brain and walk away. But I said, ‘okay, so tell me again why it’s not the right timeframe’.

“He said, ‘ you solved the problem but you solved it way too late. Because you have to figure out a way to get the guys who can’t afford a new car, at the end of their lifecycle, to go and get a new car and get an electric car.

“So what he said was, ‘you go fix it’. And I took it back and realised I’ve got to find a way to get a guy who cannot afford a new car to pay for a car; and that changed the model. It forced me to think of the mobile industry model and all these kinds of things.”

Show me the money…

Before joining SAP, Shai was an entrepreneur in Israel, where he founded TopTier Software and took the company to Silicon Valley. He has also built a number of other tech companies from scratch, prompting the question, why has he moved from technology to eco-tech?

“I think the tech boom of 10 years ago will pale by two or three orders of magnitude, when it’ll be compared to the clean energy boom.

“The energy business is the most fundamental, most robust market in the world. When you’re disrupting a market you want to start with the market that is the biggest.

“Let’s put it in perspective for a second. Google goes out and disrupts the ad business that fundamentally changes the way the long tail of advertising happens – size of the market, a few billions of dollars, $10 billion.

“Just transportation energy in the world is $1.5 trillion. If you want to go disrupt something, it helps if it starts with a T instead of a B. So there are fundamental market sizes that play toward solving energy issues.

“The second thing is, we’re getting for the first time into a – or the first time in a very, very long time – into constraint-based economics. If you look at what China is doing, the Chinese economy in effect is one of the first constrain-based economic models. The reason is, you’re driving a country with 1.3 billion people with resources for about 300-400 million equivalency if you looked at the US level of consumption.

“So it’s obvious when you run the math, you say if we just let everybody consume what they want to consume, we can’t run the country; so we have to figure out a model with which we can run the country with the constraints that we’ve got.”

Shai never wastes a word. It’s clear he has thought his ideas through and his humble manner when talking about to global politics and business is refreshing. He sits in this room without an entourage of PR people and assistants, but by himself. He knows exactly where he wants to go.

“President Shimon Peres of Israel has always been a huge inspiration. I go back to Kennedy and the Apollo mission, taking on something that for some people would be crazy but basically saying, ‘we’re going to do this and go figure out a way’.”

“So those are the kind of scopes and size of problems that we’re dealing with here. And a lot of it is, you look at your kids and you wake in the morning and say, ‘we’re not going to give you a worse place than we got’.”