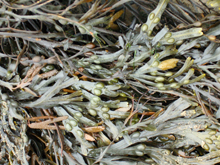 A group of scientists at a climate conference in Bali say they could also be a potent weapon against global warming, capable of sucking damaging carbon dioxide out of the atmosphere at rates comparable to the mightiest rain forests.
“The ocean’s role is neglected because we can’t see the vegetation,” said Chung Ik-kyo, a South Korean environmental scientist. “But under the sea, there is a lot of seaweed and sea grass that can take up carbon dioxide.”

One of the problems with seaweed as carbon sink is stopping the seaweed releasing carbon back into the atmosphere later on. Bad news for sushi and lava bread fans: eating it is not an option.