Seat to use solar to drive up mains power 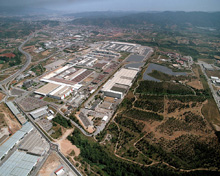 Spanish car maker Seat has decided to deck out its factory in Matrorell with solar panels, which is reckons will save it 11,7000 tonnes of carbon emissions. (Is it Greenbang or is Spain becoming something of a hotspot for solar energy at the moment, if you’ll excuse the shoddy pun.)

Seat will whack up 8.5 megawatts of photovoltaic panels which will end up generating 1.2 GWh of electricity annually by the end of this year.

Prior to this, the solar panels will be in place on the roof of SEAT’s corporate building in Martorell next March, as well as on the support structure of one of the finished vehicle parking lots. All the clean energy created will get redirected towards the power mains for distribution.

In order to take full advantage of one of Spain’s greatest resource, the Sun, and the high number of sunlight hours in the area of Martorell and its surroundings, the next step will be to completely cover two further distribution areas with a total surface area of more than 66,000 m2 and the roofs of assembly buildings 8, 9, 10 and 11, which will add an additional 139,000 m2. This phase will total more than 206,000 m2 of solar panels to produce solar energy.