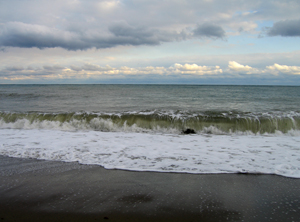 While Greenbang was busy getting excited over the delicious red and black stylings of the Seagen turbine that went up in Ireland earlier this month, she’s now had her head turned by a new Scottish interest.

While SeaGen will be pumping out its electricity goodness into the national grid later this year, the Scots are using the tides to fuel the grid right now.

As a result, Greenbang is thinking of changing over the picture in her locket now – whipping out the heart shaped picture of Seagen and replacing it with an OpenHydro snap.

Irish company OpenHydro put up the turbine at the European Marine Energy Centre’s (EMEC) test site at the Fall of Warness, off the island of Eday in Orkney back in 2006 and the OpenHydro folks have been testing out its capabilities since then. Like a dead crab or a discarded shopping trolley, the turbine sits on the seabed, where according to OpenHydro, “it’s silent and invisible from the surface and presenting no navigational hazard”.

The 250KW turbine was tested for 18 months and all went as planned says OpenHydro. Now the results of the test will be pored over and future plans made.

OpenHydro has already won tenders to supply and install turbines to tidal sites in the Bay of Fundy, Nova Scotia, Canada, and Alderney, Channel Islands.

OpenHydro has recently commenced the manufacture of its next generation 1MW Open-Centre Turbine, which will be deployed in the Bay of Fundy and Alderney. The turbines are being constructed at the company’s design and production facility in Greenore, Co Louth, Ireland.