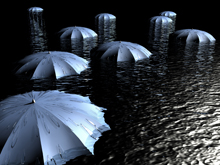 Scientists over in Grenoble are trying to recover energy caused by the vibration of raindrops as they fall and use it to power electronic devices. What next – using ants to power tiny treadmills? Recouping the heat from sweating dogs to charge up an iPod?

The scientists from CEA/Leti-Minatec, an R&D institute in Grenoble told Physorg.com that you can get up to 12 milliwatts from some of the fatter drops.

Apparently, the system – which uses polyvinylidene fluoride polymer to convert the mechanical energy into electrical energy – could be used to generate power in areas where murky conditions make solar a no-no.