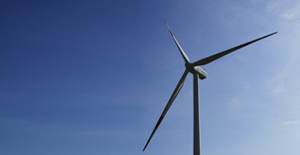 Savills, no relation to Jimmy or Row, better known for being a posh estate agent, pulled off a rather interesting deal last week. The company flogged off its half of the wind farm joint venture Infinergy to its partner in the venture, Koop Duurzame Energie.

The sale of Infinergy, which identifies UK sites for wind farm development, will net Savills £23 million, payable in three installments: £4 million on completion; £9 million in October 2008 and £10 million in December 2009. Of that £23 million, Savills reckons it’ll make a before tax profit of £17 million.

The notable thing about Infinergy, a five year old wind farm company, is that it doesn’t have any wind farms on the go.

Whilst a number of sites have been targeted for potential wind farm operation, no site has yet received planning permission to construct a wind farm. The next phase in the development of Infinergy, which is non-core to Savills, will be increasingly capital intensive.