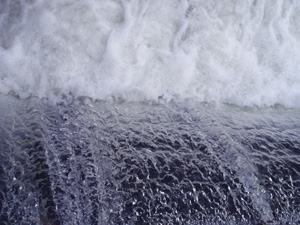 Samsung has mostly been making headlines this week for the departure of its CEO, who left after accusations of tax evasion. But while the suits get on with some reorganisation and presumably some finger pointing for good measure, Greenbang will turn its attention to what’s being developed in Samsung’s lab.

Not a scandal proof-board, alas, but a water powered hydrogen fuel cell for Samsung’s mobile phones.

According to the folks at Samsung, the fuel cell’s a bit of a doozy as it just need H2O rather than the usual methanol.

It can also put out three watts of electricity – enough to keep your mobile on the go for 10 hours or so – and it could be on the market from 2010. Hurrah!

Bit of a downside thought – in its current iteration, you’d need to swap the hydrogen cartridge every five days. But – yes, there’s a but – in future, Samsung will make batteries that don’t need all this fiddly swapping nonsense – you’ll just have to put in some water every now and again.