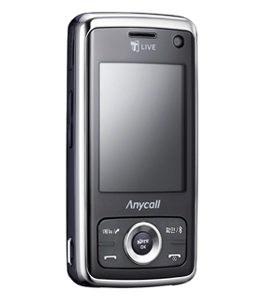 Devotees of Star Trek like to say that the program has been able, in its tenure, to predict the future. The evidence? Why, the communicator of course – dangerously reminiscent of today’s clamshell mobiles. If the communicator is any guide to the accuracy of Star Trek‘s predictions, Greenbang worries. James T Kirk certainly had an eye for the alien ladies: will the kids of 2300 all be dangerously inbred? And Scotty’s off quoted “she cannae take it any more, cap’n” doesn’t bode will for vehicle reliability.

But back to the wonderful world of mobiles. Greenbang wouldn’t mind betting that Kirk and crew wouldn’t be seen dead without a mobile sporting a cover made of the delightfully futuristic sounding bioplastic.

Samsung has beaten the Enterprise’s engineers to it though, with a pair of devices, W510 and F268, which it claims won’t be the materials equivalent of kicking the mother earth in the goolies.

W510 is Samsung’s first mobile phone with ‘bio-plastic’ made from natural material extracted from corns. Samsung has been making an effort to develop more renewable and eco-friendly material compared with common plastic produced from petroleum.

Moreover, when producing W510, Samsung did not use any heavy metals, such as Lead, Mercury, and Cadmium, and applied water-soluble coating.

Samsung F268 with all the accessories including charger and headset does not contain BFRs(Brominated Flame Retardant) or PVC.

In addition, Samsung F268 has an alarm function to encourage users to unplug their charger when the devices are fully charged. The product also is following the Energy Star requirements as well, which is strict energy-efficiency guidelines set by the US Environmental Protection Agency and the US Department of Energy.