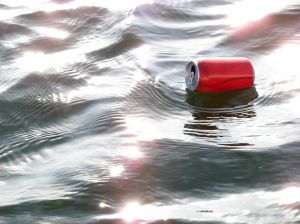 Burying carbon dioxide deep underground — carbon sequestration — comes up often as a possible fix for global warming. One concern, though, is how to make sure the carbon dioxide stays where you bury it. After all, as a gas, carbon dioxide is lighter than rocks or water, so it has that tendency to want to go … up.

Enter an engineer from the University of Texas at Austin, who says he might have found the solution.

Voila! No more desire for the gas to move upward, as carbon dioxide-laden salt water is heavier than both rocks or regular salt water.

“Our idea is the equivalent of injecting carbonated water,” Bryant says. “This process has several advantages, but the most important is that it eliminates the risk of sequestered carbon dioxide escaping from the storage formation.”

He continues, “Our work shows that this alternative process does cost more than the standard approach, but not prohibitively more. In essence, the incremental cost can be regarded as the price of risk reduction. This is an important consideration because all stakeholders will want the greatest assurance of secure storage for the lowest cost.”

Bryant is scheduled to present his research next week at the ninth annual International Conference on Greenhouse Gas Control Technologies, to be held in Washington, D.C.